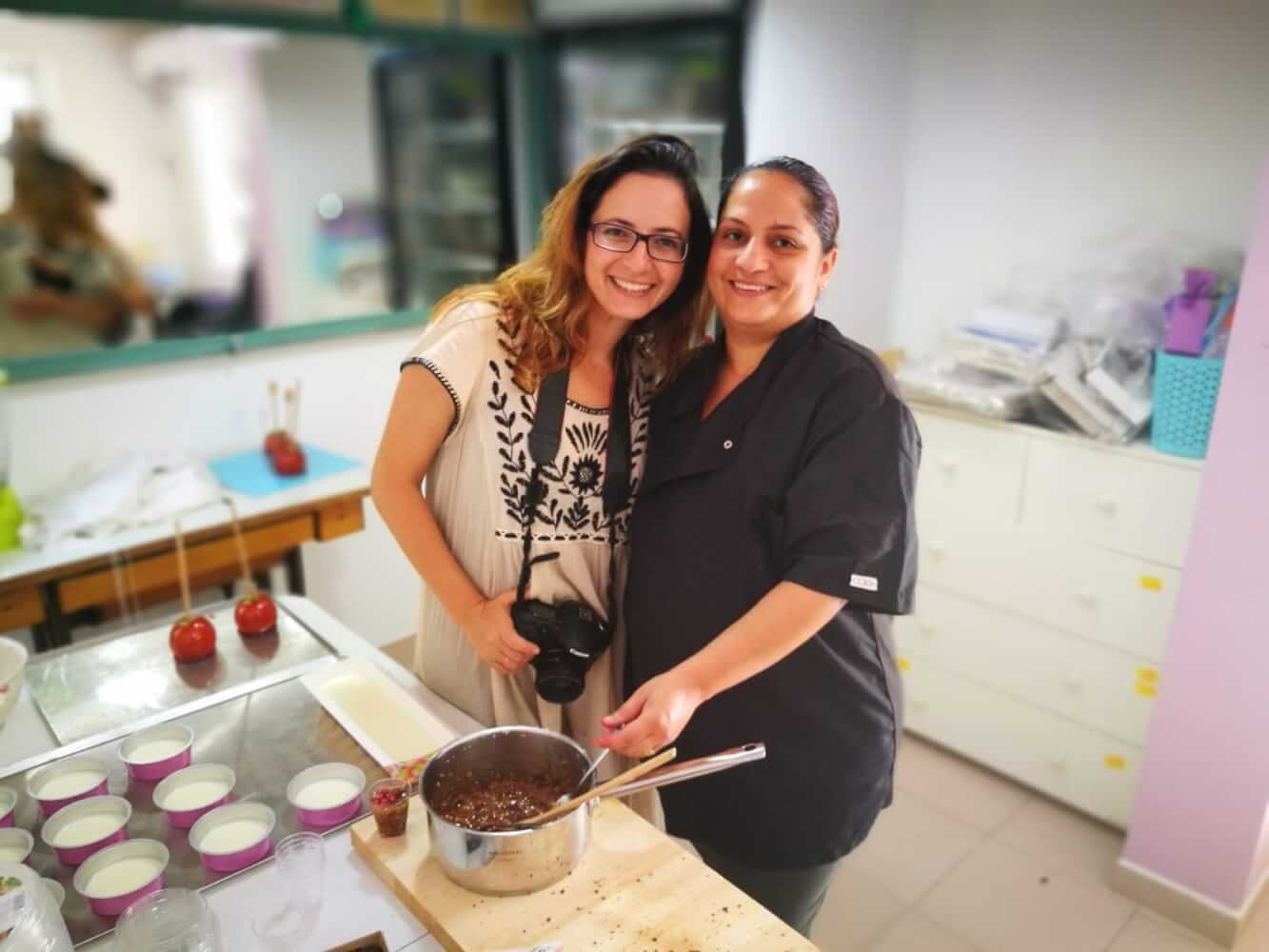 Sometimes, it seems that we grow older only to appreciate our childhood. We strive to become adults get a real job, have a company car, buy a house, travel abroad with a black case, and in a business suit. And then, sometimes, life reminds us that maybe everything is just the other way around.
So it happened what happened to Almog and her other half, Shabi. They met at work and started dating as a joke (we’ll save the juicy details for another time, eh?).
In fact, it all started pretty just standard. Wedding, married life… like any other young couple. But here things became more complicated. Complications with Almog’s asthma. Two resuscitations. A miscarriage. Everything seemed to be getting more complex… 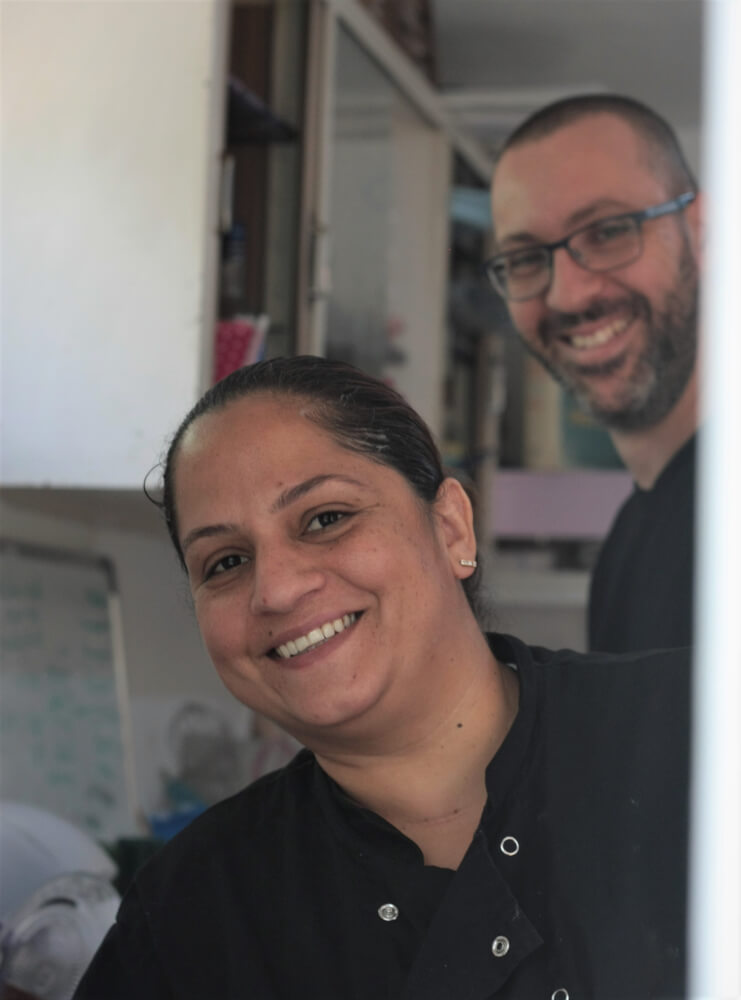 Almog felt she needed a change. That someone is signaling her to engage in positive energies. And you tell me – are there more positive energies than lollipops? From a sweet childhood memory of a red rooster on a white stick? Marshmallow that melt like a cloud?
So she started her studies in the field of chocolate. Oh, as much as I’m not an academic by nature, a degree in chocolate is something I would definitely do. So Almog went and did, and suddenly in some random workshop, came across the subject of sweets. And you know. When it is it – then it’s it. The seed was planted in her heart.

“Chocolate production is delicate and sensitive. If it feels like it is not loved enough – it is broken”

But not everything comes off so simple. Suddenly, Almog couldn’t look at chocolate. “Chocolate production is delicate and sensitive. If it feels like it is not loved enough – it is broken, “Almog explains. While Shabi, the man by her side, had to deal with the chocolate, Almog realized she was pregnant again. Admittedly, the joy lasted only briefly before changing with grief because, again, the pregnancy was unsuccessful. But, experienced with ups and downs, Almog realized that there was a hidden message here. Perhaps a hint for a change of direction…

Thus, the decision was made to move homes and make candy. Call it a mystery, call it fate, but unexpectedly, the road to sweets went through Shabi’s grandmother.

Apparently, Shabi’s grandparents were making sweets for a living. Somewhere in the 1970s Jaffa, the new immigrants from Turkey, created a magical world of sugar, for the most part, halva, caramel, rose water, and endless pleasure. Shabi says that when his mother was pregnant with his brother, she would make Gladillas (apples in glassed sugar) while watching Maccabi baseball games. How excited was the grandmother when the young couple told her of their intention to return to the sources and make the candy heritage live again. Her back, which had been bent for years, straightened, her eyes brightened, and she seemed to be a few years younger. The power of nostalgia.

They proudly show me the rooster molds. For years they were looking for such patterns and found them precisely on the day they returned from their inaugural visit to Shabi’s grandmother’s. Magically, these molds are just like Grandpa had.

The road to Katzir, where Almog and Shabi live, is shrubby and green. The streets are quiet. In this rustic house is both their small home and the chocolate and nostalgic sweets studio (Studio Sgula) they set up. Despite working full time, Shabi helps Almog make magic in their Little Kingdom. Skillfully, he transfers the glucose from the jar to the pot, stirring in sugar, almost putting a spell on it.
The variety of candy that Almog mastered is enormous. It was hard to hold back and limit what we would prepare today. But you got to make hard choices in life, aha? Having in mind that the Tishrei holidays were approaching, I was curious about which sweets were served in Turkish Jewish families during the High Holidays.
Almog offers an answer in the form of unknown names – Ashura (sweet and chilled wheat delicacy, which hardens and turns into a kind of pudding or jelly), Halva de-Novia – semolina candy in rose water aroma, garnished with pistachios, spectacular hearty, and joyous Gladiellas – sugar-coated apple and Malabi. In short – be happy (and not on a diet. We’ll leave the diet for other days, eh?)
The couple distributes the work – He’s taking the Malabi, she’ll take the rest. Almo and Shabi are synchronized as an orchestra playing for years. It is clear to me, that to survive together in a tiny kitchen, there has to be not only great love but lots of emotional intelligence and an understanding of what’s truly important in life. It is not just a recipe for a good life, but also for successful sweets. You see, Almog says sweets, especially chocolate, are sensitive to negative energies, so positivity in the studio is a necessity. Next time your relationship encounters difficulties – quickly make sweets – here’s a tip from the Turkish grandmothers.
I am amazed at the simplicity of the confectionery. “I thought the Turkish Jews lived well,” I say. “Correct,” Almog explains. It’s not about frugality, it’s about the flavor of an ingredient. If you make semolina candy – so let it be semolina. “There is a great respect for the raw ingredients, so the seasoning is delicate.
The studio smells of rose-water (to be obtained from any spice or wholefood shop). Intoxicated by the scent of optimism and love, I can easily imagine Shabi’s grandmother, laboring ahead of the New Year’s celebrations. Izmir and Istanbul flavors, something announces the arrival of a New Year, and promises that this year will be sweet. So here, the recipes Almog volunteered to share with us- in the merit of a sweet year.

So here is the Malabi recipe