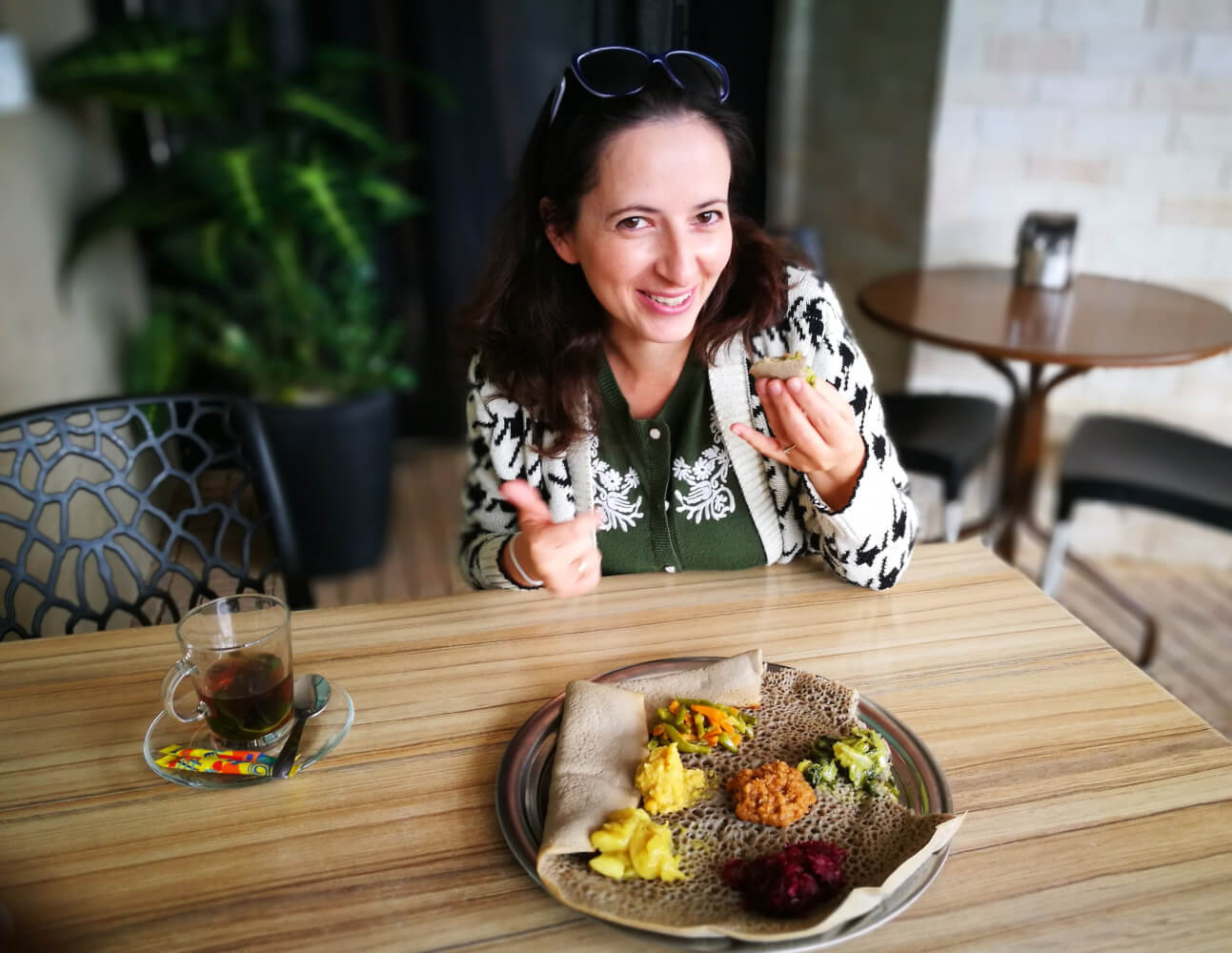 As I step into Nana, my eyes meet those of a beautiful Ethiopian woman. “I see we have a lot in common” she says before I have the opportunity to introduce myself. And somehow, I feel that she is right.

While I was born in a central city of the USSR, and she was born in a small village in Ethiopia, we both immigrated, or made Aliyah, to Israel in the 80’s. Her name is Efrat, and she is a businesswoman and advisor. Efrat helps her 2 youngest brothers, Hanan and Ilan, with their new adventure – this small and charming Ethiopian restaurant. As we dive into our conversation, Hanan joins us. Ilan will join us later.

We discuss the immigration experience. I am amazed by how many similar obstacles we had to face. Moving to a new country with children isn’t easy. Especially if you don’t speak the language.

For Efrat’s family, the change was even more difficult. From living in a village, working the land, and eating what you produce, they moved to a tiny urban apartment.

And so, we find a major difference between us. Russians arriving in Israel were at least equipped with relevant professions. Immigrants from Ethiopia were separated by destiny from the very essential foundations of their livelihood- the land. And yet, Efrat and her family have decided to make this journey “…the long journey through Sudan, risking lives, spending long months in refugee camps, to make the ancient dream of seeing Golden Jerusalem come true”.

As kids, many Ethiopian ‘Olim’ in Israel abandoned the language and denied the food. So did I when I was a kid, sometimes hesitating to invite Israeli friends – “What would they think about our food? It’s not interesting or tasty enough” I thought.

The young kids integrated quickly, easily learning the new language and culture. But the parents often stayed behind. Lack of language, cultural differences, and a limited ability to provide for their families; they often lost some of the natural parental authority, while the kids became translators for their parents. “If only they were given some land to work on – everything could have been completely different,” I say. Efrat cannot agree more.

“We named our restaurant “Nana”, which in Ethiopian (Amharic) is a nickname for Mommy” Efrat explains when I ask for the meaning of their restaurant name. “This is our opportunity to pay respect to our roots and return to the Ethiopian cuisine”.

“It seems to me that you guys are completely settled now,” I say to her. Efrat agrees, “It is true. Our parents did a great job, despite all the challenges. “Once, a colleague of mine told me that we are equal in Israel. I told him I consider myself better because my starting point was so much behind, and I made it all the way through to where I am today”.  Yet, there is a lot more to do in order to make things right for the Ethiopian community in Israel” She adds.

While I chat with Efrat (who unfortunately refused to be captured on camera), back in the kitchen Hanan is working on today’s freshly made menu. Hanan recently went on a trip to Ethiopia, which is what inspired him to go for it and open the restaurant. “Suddenly, in Ethiopia, I realized everybody is Ethiopian. This was an odd feeling for me after growing up as a minority in Israel,” He tells me.

As people are more and more aware of what they eat, we believe Ethiopian food will become more popular, as it is mostly vegan and gluten-free. The Ingara (the Ethiopian “pita” bread) for example, is now considered to be a superfood. It is made out of a gluten-free sourdough, based on teff (a type of grain), rich in protein, iron, and calcium.  These days you can find more and more recipes based on teff, and if you can’t find it in a store nearby, you can certainly get it online” He explains.

With this thought in mind, I try the freshly made Ingara with the various dips and cooked vegetables. Tasty, pretty sour, and nourishing. Taste-wise, if I had to compare it to any other cuisine, I would compare it to the Indian one- but it’s not spiced the same way, there is almost no fat, and more cardamom is being used.

There are almost no deserts in the Ethiopian Cousine- which again makes it a super healthy one. But you definitely can get a decent coffee to conclude your meal.

While Hanan packs Ingara and dips for my family, explaining these aren’t ‘too spicy’, I think about how time works its’ magic. We’ve shared some growing pains, but the sun is smiling at us and Jerusalem of Gold is shining. We made it. It is good to be home.

A Sweet Story for a Sweet Year