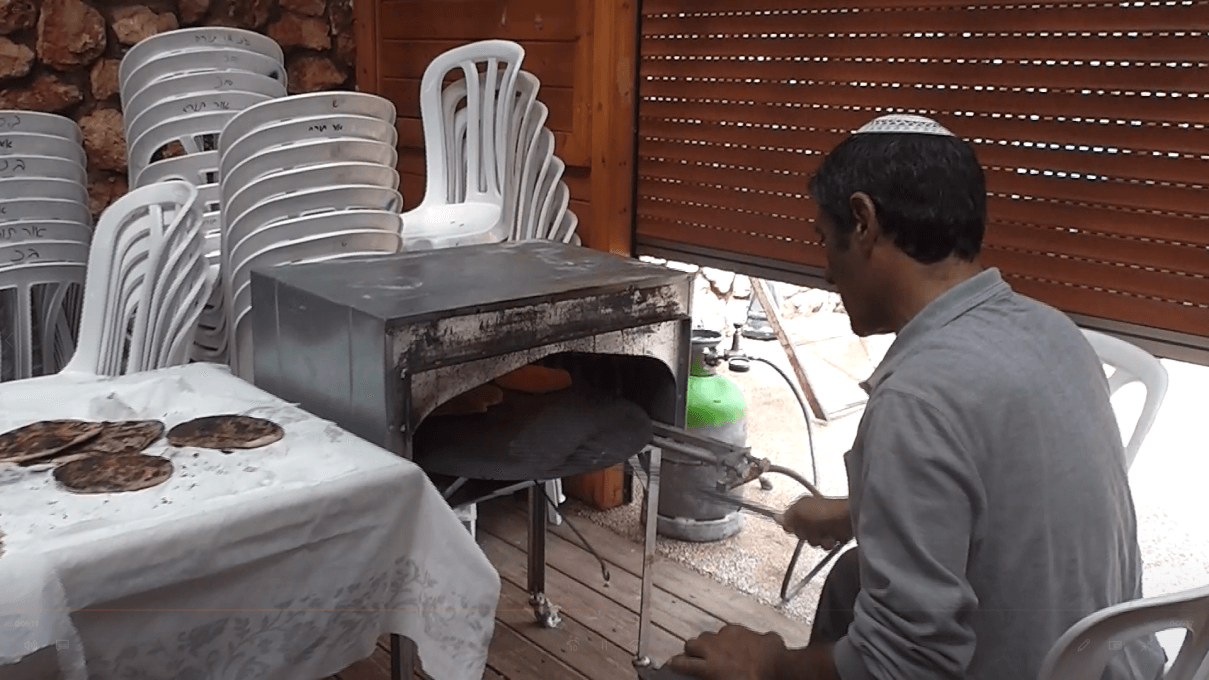 As I mentioned, I’m a pretty shy person. But this time I decided I would not miss the opportunity. On one of the most hectic days of the year- Passover Eve- I had invited myself over to our neighbours for the last 15 (OMG!) years house, The Shish family.

Passover in Jewish families are not only about food a gathering, but a lot about cleaning the house and getting rid of anything related to bread (called Chametz). Traditional families don’t only avoid eating Chametz on the week of Passover, but they would also change all the dishes, and get rid of anything that could have touched Chametz. So actually, you can call Passover an “Annual Revolution”.

After cleaning is accomplished, the food preparation may begin. And I am not talking about a 2-course meal for an average family. It’s a much more robust project!

The Shish Family, originally from Tunisia, host about 40 people for the holiday. The preparations are led by the mother, Shoshi, and her husband, Gideon. Overall, it seems to be a well-rehearsed event, as people in the kitchen (mostly women) rotate, others have snacks such as Kfita (kind of chicken an greens patties) and a Lamb and beans stew (which I enjoyed very much, and personally believe that it should be considered a sufficiently festive dish for the holiday on its own).

In a few hours, the whole expanded family will be seated around the long, covered with a white tablecloth, tables. The father will be telling the traditional story of the exodus from Egypt. Songs and some snacks, placed in the big basket the family brought from Tunisia, will accompany the reading. These snacks will symbolize some aspects of slavery and exodus from Egypt.

Gideon, proudly shows me the basket, specially brought from overseas, and a 100-year-old prayer book which belonged to his grandfather.

After getting a detailed explanation about their traditional Passover Night basket, I tried the Kfita and the Lamb dish. Both made me feel warm on this cloudy day and restored my energies. Afterward, I was invited to watch the men make the Matzot- the unleavened bread- made especially for Passover.

Now, just for the sake of reality. No one really makes this at home anymore… but, the Shish family is unique, and likes to make these Matzot themselves. They believe this will bring a blessing on their home.

The process of making this bread has to be very precise and efficient- 18 minutes are the maximum limit of time that can pass from the moment the very first drop of water touches the wheat until it goes into the oven. This, to be fair, is tough.

So, all the men are involved, including the kids, who enjoy serving as time watchers and put the adults under extreme pressure, shouting: 10 minutes to go, 8 minutes to go, and so on.

After enjoying some tea with Shoshi, I get her to promise to give me more recipes later, after the great meal. I am now running back to my parents’ house. It is time to take over the preparations for our own meal. It might be less intense, but still, cooking for 17 people without having 10 additional working hands for assistance is a challenge…